Setting up the trap...

"They sneaked in to the town of Falkenberg disguised as peasants, and at night they managed to burn all the bridges over the river Ätran"

The nordic seven years war and the battle of Axtorna

Between 1397 and 1523, the Nordic countries were united under the Nordic Kalmar Union. The Danish were soon dominating the union leading to continuous Swedish protests. Under Vasa, the Kalmar Union was finally dissoluted, and Sweden began establishing itself as a rival power of Denmark–Norway. Gustav Vasa's Sweden was in a weak position in 1523, as access to the North Sea was dominated by the Danish Sound Dues and limited to a 20 kilometer stretch on the Kattegat in the vicinity of Älvsborg castle, where modern Gothenburg was later founded. Furthermore, Denmark controlled the Baltic, limiting Swedish movement there.

was the war between the Swedish kingdom and a coalition of Denmark–Norway, Lübeck and the Polish–Lithuanian union, fought between 1563 and 1570. The war was motivated by the dissatisfaction of King Frederick II of Denmark with the dissolution of the Kalmar Union, and the will of King Eric XIV of Sweden to break Denmark's dominating position. The fighting continued until both armies had been exhausted, and many men died. The resulting Treaty of Stettin was a stalemate, with neither party gaining any new territory.

As Denmark had conquered all of the Swedish West coast, the swedish navy had to use military force to breech the Danish fleet in the Strait, Öresund.

This was of course only a short time solution until the army got a chance to break the Danish coastal barrier. After trying to lay siege on Älvsborg and Halmstad, Sweden finally managed to conquer the Danish coastal castle of Varberg. The Danes responded quickly by laying siege to the castle themselves. This was in 1565. The Danish force was in a bad shape and news came that the Swedish king had gathered an army in the neighboring county, Västergötland, and were on the march to break the siege. The Danish commander, a hired German nobleman, named Daniel Rantzau, now regarded his troops were to weak to stand and fight, gave the order to regroup and march towards the south and a chance to restore in Halmstad. However the Swedish forces were eager to come to a decisive victory over the long fought feud and sent a small troop to try to stop the Danish retreat. They sneaked in to the town of Falkenberg disguised as peasants, and at night they managed to burn all the bridges over the river Ätran thereby forcing the Danish army to seek a suitable ford 30 miles upstream at Axtorna. Going upstream in this case meant getting closer to the Swedish border and the Swedish army closing in on them head on.

On the 20th of october the two armies met at Axtorna, Rantzau had arrived first and had take up a strong defensive postion with his smaller army, a postion which secured his line of retreat across the fords. Rantzaus army was the entire army available to the Danes in 1565 except for the garrisons of the Danish fortresses and the detachements aboard the fleet. If Rantzaus army

was lost the eastern Danish provices would be defenceless. This meant that he had little incentive to fight a risky battle with a larger enemy force. However on the swedish side, Hestesko was determiend to follow the Royal command he had been given and he decided to commit his larger army to battle despite the strenght of the Danish position, much to Rantzau's surprise.

At a start the swedish footsoldiers in the kings own brigade made some progress, gaining the position on the small hill Byaberget and managed to push the danish lines back and up the major hillsides. The battle commenced for some 6 hours and half way through, the luck for the swedes had turned. The Swedish horseregiments were battered by the more drilled and experienced danish. The major part of the Swedish knights were in fact not taking part of the battle at all. They remained at a safe distance at Köinge village waiting in the forest.

It has been disputed why they acted this way.

The Danish horseregiment returned to the battle after chasing of the Swedish cavalry, now being able to charge the swedish footregiments in the back. Facing a two front battle a part of the foot soldiers formed a wheelformation. The lack of support from Swedish horse however soon led to panic and the formations scattered with the soldiers fleeing for their lives. Many were chased down to the river where they were stabbed down by the danish cavalry. Some 4000 men died that day.

Several of the horsemounted units in Swedish service proved higly unreliable in 1565, Drachstedts cornet actualy left the battlefield at Axtorna without firing a shot or striking a blow and several cornets deserted to the Danes during the winter. 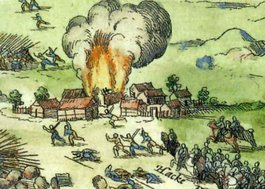 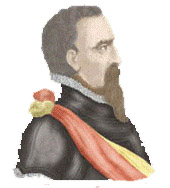